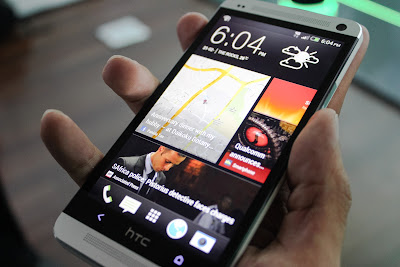 I recently upgraded my smartphone from ye olde Nexus S 4G to the new HTC One.  I absolutely love the hardware on the One, but software not so much.  I had grown accustomed to the stock flavor of Android and now I have been forced into the HTC Sense world.  So I embarked on a journey into the Play Store to get the experience I wanted out of my phone.  After all, that is what having an Android phone is all about.


Disclaimer: Finding new apps to truly customize my phone is the best reason to have an Android phone, but remember to pay attention to what permissions each app is requesting and don't install any app if you aren't sure about what it wants.
I only wanted apps available from the official store (I won;t go into reasons at this time, but installing custom ROMs isn't my thing).  My goal was to get a mostly stock experience but with a few changes.  First up, we need a new App launcher.

Nova Launcher
Many people probably never use an app launcher other than what comes with their phone.  It's really too bad since the launcher is the main interface that you use to access your apps.  All of the pages, app short cuts and widgets all live on pages generated by your app launcher.  Check out this link if you want more info on what exactly an app launcher does.  There are a lot of options for this but I really like Nova.  The free version is awesome but a premium version is available if you want some additional features like notification counters on your app icon.

I have never used a stock messaging app that I liked since my old Palm Pre (unified messaging FTW!) but a new app I have been using is damn nice...
Textra
If you are still using the messaging app that comes with your phone stop now, go get your phone, and do yourself a favor and download this free app.  It has a quick message feature so you can reply to texts without exiting the app you are using.  It also allows for group MMS messaging so you can keep up with your goofy iPhone friends.  There are a ton of other great features but you'll have to play with those yourself.  I was previously using a similar app called HandCent but it has a habit of not sending messages from time to time.

Now that you can text properly lets look at my last big beef with Android phones: the keyboard.
SwiftKey 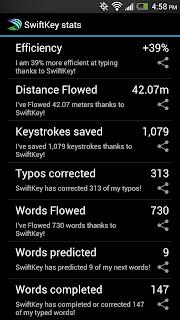 SwiftKey is hands down the greatest keyboard replacement that exists today.  Not only does it offer predictive typing suggestions that can learn about how you like to use words but it also now has a tracer feature called Flow that lets you trace words on the keyboard without tapping new letters.  Over time it will learn your style so well that you may only need to type in the first few letters and it will be able to predict the rest of your message.  It has happened to me before and it was glorious!  I have the paid version but a free version is also available.

Those three apps make up my absolute must-haves for anyone running Android but it is definitely not the end of the list.  These apps are not as essential but definitely carry the official IMS Seal of Approval:

Simple Calendar Widget
I don't use many widgets on my screens but this is one I have come to appreciate.  It is a very nice, minimalist display of upcoming events.

1Weather
Again, I don't run many widgets and I don't use the customary clock/weather widget (this app does come with that option) but I love how this app presents weather info.

GalleryICS
I became addicted to the stock Android photo gallery and it's photo editing features on my last phone.  This is allows anyone running any Android version to get those features too.  With a few quick swipes you can goose the color, brightness, and contrast to really give your photos a much more polished feel.  Friends don't let friends post untouched photos!

Let us know what apps you can't live without!